Analysis Design and Use

The transient effect analysis was designed to enable software architects to evaluate the effect and dependency of reconfiguration performance with self-adaptive software systems. It adheres to and follows the definition of actions as subsumed by the modeling concept Strategies, Tactics, Action (S/T/A). S/T/A structures reconfigurations as a hierarchy of strategies (top), tactics, and actions (bottom). An action is a reconfiguration operation supported by the execution environment of the software system. An example action is the execution of a VM migration in an Infrastructure-as-a-Service (IaaS) Cloud environment.

To avoid naming collisions with the Actions in the Resource-Demanding Service Effect Specifications in Palladio (RDSEFF), the following and the implementation refer to adaptation actions as Adaptation Behaviors.

Please refer to Chapter 6 of the dissertation by Christian Stier for detailed information on language design and analysis logic. This section focuses on the essentials of using existing adaptation actions, and the definition of new actions.

Use of Adaptation Actions/Behaviors in SimuLizar Analyses

As a prequisite to use existing specifications, the user of a SimuLizar simulation has to specify the Adaptation Action model instance that contains the actions she wants to use: 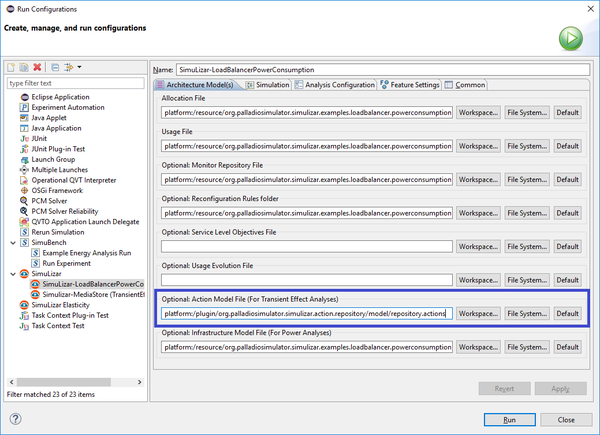 The default repository contains a set of Adaptation Behaviors for considering the transient effects of:

The behaviors are documented in the dissertation by Christian Stier.

As a prequisite to use an adaptation action, the user has to specify the Action model as part of the transformation signature:

The actionsInput model contains the Action repository, the roleSets has to be defined for the adaptation action to have instantiation and output parameters that can be used and read outside of the QVTo model transformation.

Further, the transformation should import the metamodel namespaces of the Action metamodel:

In order to look up the action, the ID or name of the action can be used:

The Behavior then can be executed by calling one of its execute EOperations with instantiation parameters:

In the listed example, the action is parameterized by: targetResourceContainer

Once the resource demands associated with the Adaptation Behavior have been processed, the transformation returns and continues with the remaining steps of the QVTo reconfiguration rule. Note: There are also asynchronous implementation alternatives to execute.

The Adaptation Action metamodel was designed to support the reusable specification of Adaptation Behaviors. Each behavior consists of a set of AdaptationSteps that execute parts of it. We refer to the dissertation document for a process overview on how to define additional actions, and detailed semantics of each step type.

There are two basic examples that leverage the Transient Effects Analysis.

The horizontally scaling Media Store example from the SimuLizar GIT is a simplified version of the case study system used in the referenced paper. It instantiates additional Reencoder component instances to deal with an increasing rate of reencoding requests. The reconfiguration rule scales the numer of Reencoder components once a predefined threshold is surpassed, and executes the horizontal scaling using the ComponentInstantiation Adaptation Behavior. The reconfiguration rule reconfigurations_active\horizontalscaling.qvto contains this rule definition. 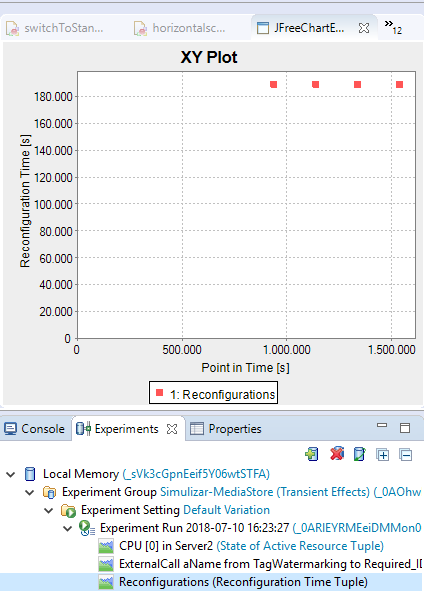 Note: The time is reported at the completion at a reconfiguration. Consequently, the point in time at which a successful reconfiguration was started can be calculated as the difference between the x and y values of its measurement tuple.

The second example is derived from the basic load balancer example of SimuLizar. It is available in the SimuLizar GIT. The example requires the power consumption analysis to function.