Industrial automation deals with the use of control systems and information technology to reduce manual work in the production of goods and services. While industrial automation systems originate from manufacturing, now there are many other application scenarios. Industrial control systems are for example used for power generation, traffic management, water management, pulp and paper handling, printing, metal handling, oil refinery, chemical processes, pharmaceutical manufacturing, or carrier ships.

We constructed a PCM-based reliability model for a process control system developed by ABB. The system implementation consists of several millions lines of C++ code. On a high abstraction level, the core of the system consists of eight subsystems, which we treated as software components. These components can be flexibly deployed on multiple servers depending on the system capacity required by customers.

To construct the PCM model, we collected the following input data (details in Koziolek2010).

Figure 2 depicts a possible configuration of the system with three servers. The names of the components and their failure probabilities have been obfuscated for confidentiality reasons. We modelled four of the most important usage scenarios, which are executed in parallel during system execution. Each usage scenario triggers a different control and data flow through the system. 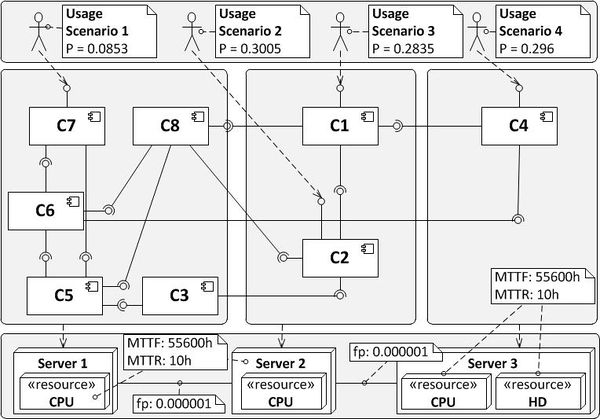