The Palladio Component Model (PCM) can be used to predict the reliability of IT systems with component-based software architectures. While the overall approach to PCM-based reliability modelling and prediction is described on a separate page, this page specifically focusses on the prediction part, which evaluates a fully specified PCM instance with respect to its expected reliability. The description assumes that the reader is familiar with the general concepts of PCM (for further information, see the PCM tutorials).

PCM-based reliability prediction determines an IT system's expected reliability as the probability of successful service execution, relative to a given PCM UsageScenario. The prediction method focuses on the behavioural specifications of a PCM instance, i.e. ScenarioBehaviours specifying user behaviour and ResourceDemandingBehaviours specifying system behaviour. Taken together, these specifications form a tree of nested action sequences: each ScenarioBehaviour and ResourceDemandingBehaviour represents a sequence of invididual actions, and the actions can include further nested behaviours (e.g., a LoopAction contains a body behaviour, a BranchAction contains multiple branch transition behaviours, and an ExternalCallAction points to the next ResourceDemandingSEFF behaviour). The UsageScenario itself contains one ScenarioBehaviour that constitutes the topmost action sequence.

The overall tree of nested action sequences and the semantics of each action determine the possible execution paths through the UsageScenario, as well as the occurrence probability of each execution path (in this discussion, the term 'execution path' is meant to include user actions as well as system actions). For example, the body behaviour of a LoopAction is executed multiple times in a row, while for a BranchAction, exactly one of its branch transition behaviours is executed. Loop iteration counts and branch transition probabilities are stochastically specified and may include parameter dependencies (i.e. they may depend on properties of input parameters as specified in the PCM UsageModel), which are resolved prior to reliability prediction by the dependency solver algorithm.

During service execution, visits to certain actions can result in a failure occurrence. Hence, these actions are the potential points of failure (PPOFs) of the service execution. Other actions possess the capability to recover from failure occurrences and constitute the points of recovery (POR). In short, PPOFs include InternalActions, which may fail due to (i) system-internal software faults or (ii) unavailable required system-internal hardware resources, and ExternalCallActions, which may fail due to (i) system-external service failures, (ii) system-internal network transmission failures or (iii) unavailable system-internal hardware resources (which may be required by a remote computing node that hosts the called software component). PORs include RecoveryActions, which can tolerate failure occurrences of their internal RecoveryActionBehaviours. See PCM-based Reliability Modelling for further details.

Considering the set of possible execution paths and their occurrence probabilities, the included PPOFs and PORs and their associated reliability annotations (i.e. failure types, failure probabilities and MTTF/MTTR values), all required information is available to conduct the reliability prediction. The main prediction result is the probability P(SUCCESS|U) of a successful (i.e. failure-free) run through a UsageScenario U, as well as its counterpart P(FAILURE|U) = 1 - P(SUCCESS|U). The latter P(FAILURE|U) may be further differentiated depending on the configuration of the reliability prediction, in order to give more insight into the reliability impacts of the individual modelled failure potentials. The prediction method itself includes a transformation from a PCM instance to a discrete-time Markov chain (DTMC) and solves the chain in order to obtain the prediction results.

Based on a fully specified PCM instance, reliability prediction can be configured and executed as an Eclipse run configuration as follows:

The available settings are organized in multiple tabs "Architecture Model(s)", "Analysis Configuration", "Analysis Options" and "Common". The following explains the first three tabs in detail (the "Common" tab contains generic settings for all Eclipse run configurations, see the Eclipse help for further information). Notice that some of the settings are not actually relevant for the reliability solver - they have been taken over from the SimuCom run configuration. A limitation of the displayed settings to the relevant ones only remains as an open issue for the implementation.

The "Architecture Model(s)" tab contains settings to specify the PCM instance under study:

Notice that the PCM Allocation and UsageModel are sufficient to unambiguously define a PCM instance, as they reference the other model parts. 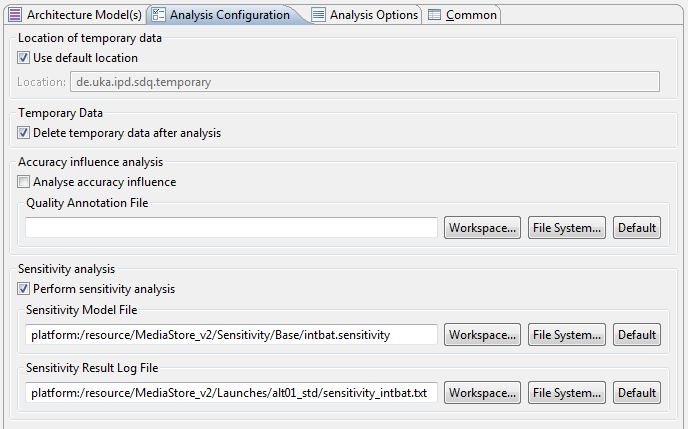 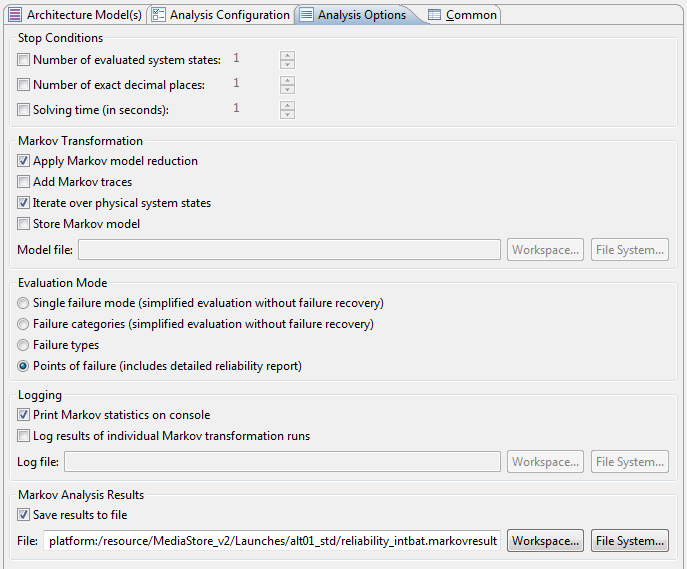 The "Analysis Options" tab contains further settings to specify how the reliability prediction shall be conducted:

At the end of a reliability prediction run, the prediction results are automatically displayed in a HTML format in the central pane of the Eclipse workbench. Through the "Save results to file" option of the "Analysis Options" tab, the results can also be persisted in a file (see the Prediction Configuration section). A double-click on this file within the Eclipse workbench will again display the results. Figures 4 and 5 show the visualiation of prediction results by example. 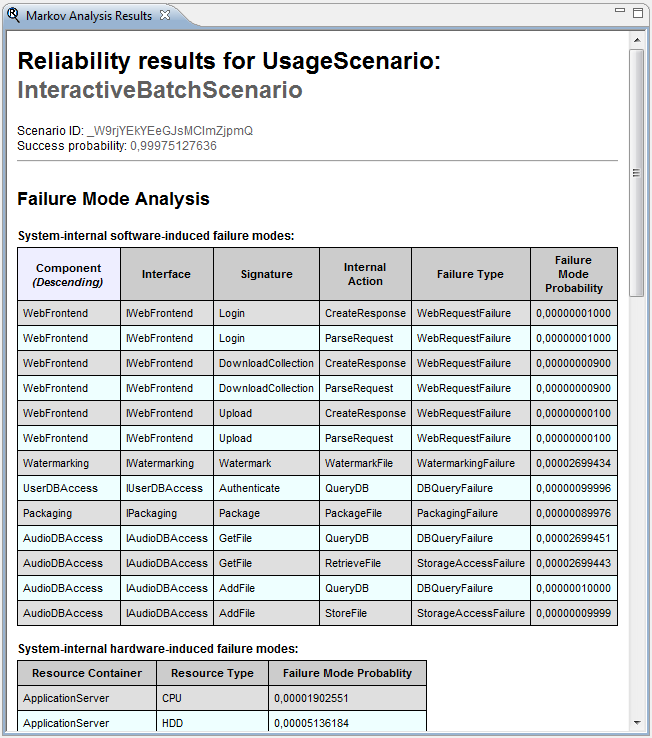 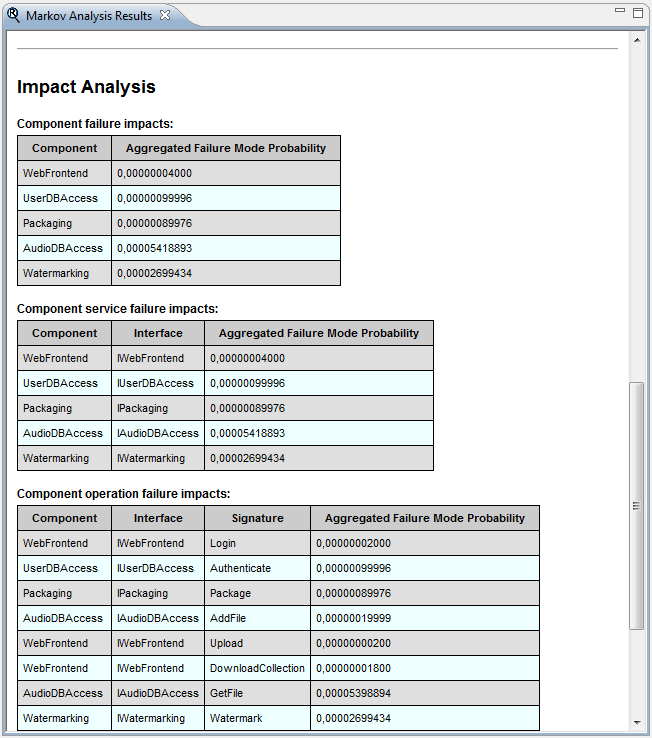 Prediction results are displayed individually for each PCM UsageScenario. For each UsageScenario, the display includes the scenario name and ID, the overall success probability, a failure mode analysis (Figure 4) and optionally an impact analysis (Figure 5). The failure mode analysis shows the occurrence probabilities of individual failure modes, according to the specification of the evaluation mode in the analyis options (see the Prediction Configuration section). In the example, the most differentiated "points of failure" evaluation mode has been selected, and Figure 4 shows some of the corresponding prediction results (internal software-induced failure modes per InternalAction and SoftwareInducedFailureType, as well as internal hardware-induced failure modes per ResourceContainer and ProcessingResourceType).

The impact analysis as shown in Figure 5 is only provided if the evaluation mode has been set to "points of failure". It aggregates individual failure mode probabilities to show the overall failure impacts (i.e. contributions to P(FAILURE|U)) of software components, component services, component operations etc. The results of the impact analysis allow for drawing conclusions about the system under study. For example, the analysis reveals which software component within a planned architecture and usage profile context is most critical (i.e. most likely to cause failure occurrences due to included software faults) and should be rigorously tested after development.

By clicking on the headers of each individual results table, the table contents can be sorted in ascending or descending order of the corresponding column (in Figure 4, the "Component" column of the topmost table is sorted in descending order).

While a single reliability prediction run reveals several insights in a system under study, the obtained prediction results refer to a single architectural candidate and usage profile. They cannot be used to investigate questions such as the following ones:

To this end, a sensitivity meta-model has been defined, which specifies gradual changes of individual aspects of an underlying PCM instance. Hence, modellers can easily express variations of a system architecture and usage profile, and they can trigger a series of prediction runs that automatically investigates each variation and collects the results. 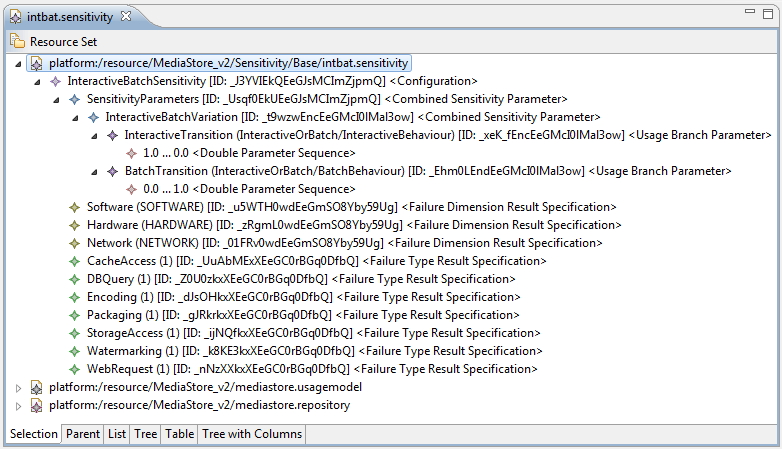 Figure 6 shows an example of a specified sensitivity model. To create such a model, proceed as follows:

The model is constructed according to the following rules:

In the example of Figure 6, the SensitivityConfiguration "InteractiveBatchSensitivity" contains a CombinedSensitivityParameter "InteractiveBatchVariation", which influences a Branch in the underlying PCM UsageModel by gradually shifting the branch transition probabilities of two branch transitions "InteractiveTransition" and "BatchTransition" between 0 and 1. Hence, the model expresses a gradual change of user behaviour in the UsageModel. Moreover, a set of SensitivityResultSpecifications specifies prediction results of interest, namely the overall failure impacts of the software, hardware and network dimensions, as well as the failure impacts related to certain processing steps in the behavioural specifications of the PCM instance.

A series of prediction runs (instead of a single run only) can be triggered by the "Sensivity analysis" settings of the reliability run configuration (see the Prediction Configuration section). A sensitivity model file related to the given PCM instance must be specified. The prediction results of all runs will be stored in a CSV format at the specified location ("Sensitivity Result Log File").

As an alternative to the previously discussed Markov analysis, the PCM also offers a means to predict a system's reliability through simulation, using its built-in SimuCom engine (see [1] for details). Traditionally, SimuCom simulates the behaviour of system users, the execution of system services and the consumption of hardware resources over a simulated timeline, and it collects data about the system's performance such as completion times of service execution and the utilization of resources. For reliability prediction, SimuCom has been extended to trigger failure occurrences according to the failure potentials included in the modelled PCM instance. To this end, the simulation generates exceptions when visiting potential points of failure (PPOFs) according to the specified software and network failure probabilities, hardware MTTF/MTTR values and external service failure probabilities. Just as the Markov analysis, the simulation outputs the success and failure mode probabilities of each UsageScenario.

As failure occurrences are typically rare events, the applicability of SimuCom for reliability prediction is limited to moderate reliability levels and / or "simple" system architectures, and it is not propagated as the main method for PCM-based reliability prediction. Furthermore, the simulation results are affected by statistical variation, in contrast to the numerically "exact" results of the Markov analysis. However, the reliability simulation does possess interesting features, which are not provided by the Markov analysis:

Notice that SimuCom will make use and interpret all performance-specific annotations of the PCM instance (e.g. system workloads, resource demand sizes, resource processing speeds, resource schedulers etc.), even if it is used only for reliability simulation. Moreover, the simulation makes some additional assumptions that are not necessary for the Markov analysis: 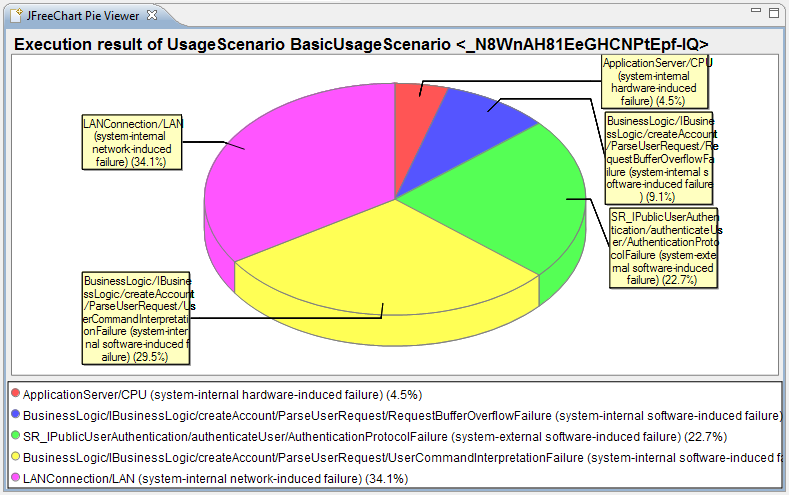 In order to conduct a reliability simulation with SimuCom, proceed as follows:

With the "Simulate failures" option activated, SimuCom will consider the modelled failure potentials and generate corresponding failure occurrences. In the simulation results, a new class of sensors exist - the execution result sensors. These sensors record the results (success or failure mode X) of all usage scenario runs, entry-level system calls and component service invocations. On the highest level (i.e. the usage scenario runs), the results correspond to those of the Markov analysis, expressing the overall success and failure mode probabilities of the scenario. Each execution result sensor has two graphical visualizations:

Figure 7 shows an example of a "Failures only" visualization of a usage scenario execution result sensor. Additionally, the reliability results are printed on the Eclipse Console view as a direct feedback to the simulation user.